WASHINGTON–With nearly 10 million new cases of dementia and Alzheimer’s disease occurring each year, and no cure, AARP has launched a new campaign, “Disrupt Dementia.” The campaign aims to help drive new diagnostics and treatments for dementias while providing education, support and hope for patients and family caregivers impacted by the physical, emotional and financial stress of dementia.

The centerpiece of the campaign is AARP’s new $60 million investment in the Dementia Discovery Fund (DDF), the first and largest venture fund focused on discovering and developing effective new drugs for treating dementia. AARP also helped secure the participation of UnitedHealth Group (NYSE:UNH) and Quest Diagnostics (NYSE: DGX), which have invested $10 million and $5 million respectively— totaling $75 million to the DDF’s fight against a condition that has not seen a new approved treatment in 15 years.

“AARP’s mission is to empower people to choose how they live as they age, but dementia takes that privilege away from millions of Americans and people around the world,” said AARP CEO Jo Ann Jenkins. “The statistics are staggering, and the numbers continue to climb each year. By 2030, there are projected to be 82 million people suffering from dementia. And despite decades of research costing billions of dollars, there is still no cure and few ways to treat symptoms of dementia. With today’s investment in the DDF, AARP and our partners have committed to helping find innovative solutions that can reverse the trend of this health crisis and champion brain health.”

A newly released AARP survey of U.S. physicians shows that doctors are also frustrated with the limited tools available to diagnose and treat dementia for their patients. One in three U.S. physicians surveyed say they feel that current dementia treatment options are poor, and nearly half of physicians strongly agree that there needs to be more diagnostic tools and research for dementia. In fact, most physicians (62 percent) say a lack of diagnostic tools is the greatest impediment to effective treatment. Moreover, there is not significant optimism among physicians for progress anytime soon. Only 10 percent say they are extremely or very optimistic that effective treatment protocols will emerge in the next five years.

The last Alzheimer’s drug was approved more than a decade and a half ago and only brings temporary relief of disease symptoms. Since that time, more than 400 clinical trials have failed. Highly touted research focusing on eliminating plaques and tangles has, unfortunately, not produced safe, effective treatments, and some companies have abandoned their efforts in the face of long odds. Because of this, nearly half of physicians in the new AARP survey say dementia is a hopeless diagnosis.

And the brain health crisis doesn’t just affect dementia sufferers, but also their friends, family and loved ones. The latest data shows that the impact of dementia on both patients and family caregivers will only continue to grow, as the number of people with the disease in the U.S. is estimated to reach 14 million by 2050, according to research conducted by the Alzheimer’s Association. It is estimated that family caregivers of people with Alzheimer’s and dementia provided 18.4 billion hours of unpaid assistance in 2017 alone, a contribution valued at $232.1 billion nationally.

To draw attention to the experiences of patients and family caregivers and to spark bold new solutions for the world’s brain health crisis, AARP is initiating a conversation during national Alzheimer’s & Brain Awareness Month. On June 25, AARP hosted an event in New York City featuring a group of experts in the medical, business and technology sectors as well as notable celebrity guests, including acclaimed journalist and author Katie Couric as the event emcee, and award-winning actress Jane Krakowski, who shared her own personal experience as a dementia caregiver.

Following remarks by AARP CEO Jo Ann Jenkins, the experts and advocates spoke at the event including Kate Bingham, the SV managing partner of the Dementia Discovery Fund; UnitedHealthcare’s Chief Medical Officer Dr. Peter Pronovost; and technology and personal finance reporter and expert, Natali Morris.  Key learnings, tips and content for family caregivers will be shared at www.AARP.org/DisruptDementia for those unable to attend in person.

“Dementia is a devastating disease that affects the lives of millions of people and their families,” said David S. Wichmann, CEO of UnitedHealth Group, a new DDF investor. “UnitedHealth Group is grateful to be part of this important work with AARP because it is grounded in the idea that, by joining together, we can support scientific discovery to help identify and bring to market new and effective therapies that may one day prevent, cure, or slow the progression of dementia.”

Steve Rusckowski Chairman, president and CEO of Quest Diagnostics, which has also invested in the DDF, added, “Current efforts to diagnose and treat dementia have not been successful and more needs to be done.  That’s why we’re proud to join forces with AARP and UnitedHealth Group to support the development of new tools and treatment options.”

Said Kate Bingham of the DDF: “We are thrilled to have received an investment of $60 million from AARP. This investment, together with participation from UnitedHealth Group and Quest Diagnostics, is further recognition of the potential of the DDF’s unique approach to finding important treatments for dementia, including Alzheimer’s disease. It also represents further U.S. interest in the fund, reflecting the global importance of developing new treatments for dementia.”

For many, the battle isn’t professional, but personal.

“After my family’s personal experience with dementia, I echo AARP’s concerns about this looming health crisis and I applaud the campaign to Disrupt Dementia,” said Jane Krakowski. “The chance to stop the impact of this heartbreaking disease could be nothing short of life changing for so many people, and AARP’s mission to spread education and understanding of the disease has the power to be truly transformative.”

Since its launch in 2015, the DDF has invested in 16 drug discovery companies and projects, with new investments now made possible because of the backing of AARP, UnitedHealth Group and Quest Diagnostics. By investing in new scientific approaches and applying insights from other areas such as oncology and immunology to develop novel dementia drugs, the DDF seeks to tackle this global challenge from a renewed perspective.

While research is underway to find treatments and a cure, AARP offers resources and tools on its website for the 16.1 million Americans who care for people living with dementia. The organization continuously works to improve the communities in which people with dementia and their caregivers live, by working with leaders and local governments across the U.S. to adopt “age-friendly” guidelines and develop resources. AARP also founded the Global Council on Brain Health to help people strengthen their brain health and minimize their risk of dementia. And, AARP is part of the National Advisory Council for Dementia Friendly America.

To access information available to family caregivers, visit: https://www.aarp.org/caregiving/care-guides/dementia. To join the conversation on social media, use AARP’s official campaign hashtag, #DisruptDementia. AARP also urges people to share memories of loved ones impacted by dementias or Alzheimer’s on Twitter and Instagram at #HowIRemember. 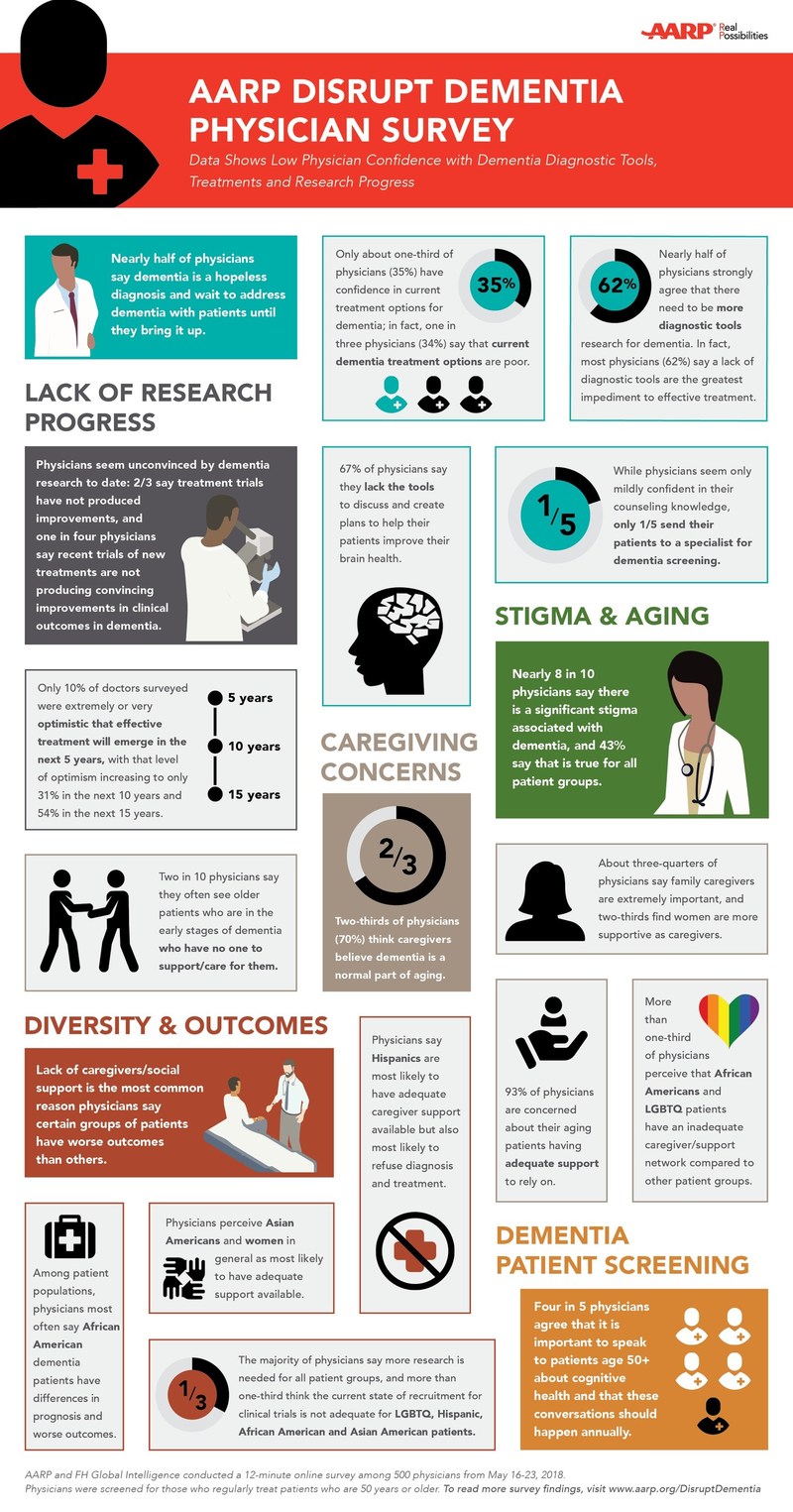