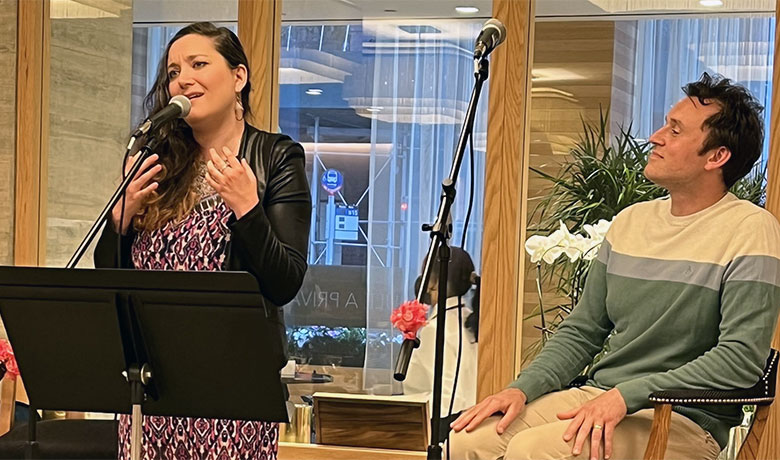 Senior living companies and communities often put a lot of time and thought into their resident programming—after all, those activities play a big role in their residents’ day-to-day lives. Inspīr Carnegie Hill, located in Manhattan’s Upper East Side, certainly takes that responsibility seriously when it comes to curating their event programming.

“Our philosophy of vibrant, intentional living echoes loudly throughout all [of] our program offerings,” said Evan Rossi, director of resident experience. “Whether it is art and music, movement and mobility or taking time to laugh, life at Inspīr Carnegie Hill keeps our residents engaged and vital.”

He then went on to explain the process.

“We began by envisioning what would constitute a vibrant lifestyle, then we decided upon nine core elements that would run throughout our programming,” said Rossi. The core elements are engagement, purpose, movement and mobility, art and music, belonging, family, brain health, nature and laughter.

“We later identified the best partners to deliver those experiences, by finding programs to suit the Inspīr philosophy and mission,” Rossi continued.

They also considered what these activities would look like at all three of Inspīr Carnegie Hill’s care levels—assisted living, enhanced care and memory care. As such, a big goal of this programming was to make sure that there’s something for everyone.

“From culinary demonstrations and wine tastings to professional performances, political debates, and exercise and wellness classes—whether offered in-house or outside our doorstep—there is always something going on,” Rossi said.

“Residents were given the option to enjoy dinner and a show…as they watched Broadway-level performances, with the fine dining offered at our formal 1802 restaurant,” Rossi said. “And seeing the positive response from our residents, we continued the series as we welcomed American tenor Terrence Chin-Loy and coloratura soprano Emily Misch.”

“We launched a three-part political series as part of our approach to furthering education with resident-facilitated teaching, as well as keeping the residents engaged in their neighborhood,” Rossi explained. “The forum opened the floor to discuss pressing matters facing our country, including the Supreme Court’s recent decisions, protecting democracy and restoring public trust. The politicians addressed a variety of questions from our residents, many of whom have spent time volunteering for political campaigns.”

Inspīr Carnegie Hill also offers residents monthly trips into the city, where they get to explore new sights and attractions in NYC. “We like to help our residents continue to explore the city they love,” said Rossi. “Our ‘On the Town Experiences’ embrace our core element of belonging, where the goal is to keep our residents connected through community-based partnerships in addition to cultural programming and outings.”

They’ve visited museums and galleries (like the MET and the New Museum), landmarks and more.

For example, one of their residents that had a “lengthy theater career” and appeared in both Law & Order and Six Degrees of Separation started a film club that hosts regular screenings in Inspīr Carnegie Hill’s theater. “I love seeing residents continue to pursue their passions or take on a new interest,” Rossi said.

After all, that’s part of the purpose of these activities and programming.

“It was our goal to ensure our residents live life with intention through creative experiences and opportunities for connection,” said Rossi. “It is an honor to be able to support older adults looking to continue their vibrant lifestyles here in New York City, in addition to learning about their unique backgrounds and helping them continue to live their best lives.”

Editor
Caroline Chan is the Editor of Senior Living News, an online trade publication featuring curated news and exclusive feature stories on healthcare industry changes, trends, thought leaders and innovations. In this position, she is responsible for creating editorial content, writing regular feature articles and publishing news to SeniorLivingNews.com and distributing its e-newsletter. She is also involved in putting together the educational programs and moderating panels for the company’s HEALTHTAC events. She graduated from Marist College with a Bachelor of Arts in Communications with a focus in Journalism.
2022-08-12
Caroline Chan
Share
Previous Aegis Living Opens World’s Greenest Senior Living Community in Seattle
Next Goodwin Living™ Closes on Acquisition of Hermitage Northern Virginia