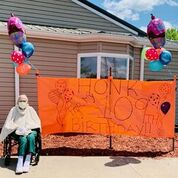 past her home at River’s Bend Retirement Community in Lyon Co. Harrington was all smiles under her protective face mask, waving at every one of the nearly 40 vehicles as they drove by including fire trucks adorned with pink balloons, mayors of three nearby towns, and loved ones with noisemakers and signs.

News of the parade quickly spread through local news outlets and hundreds of shared posts on social media rallying the community to wish Harrington a happy birthday. Due to COVID-19 restrictions, the celebration took additional precautions to ensure Harrington’s health and safety was protected. Parade participants from all over western Kentucky celebrated Harrington at a safe social distance for her landmark birthday. The caravan lined up at nearby Kuttawa First Baptist Church and traveled past River’s Bend Retirement Community where Harrington waited outside.

“Fewer than one percent of Americans live to be 100 and we’re honored to celebrate Ruth, who is our oldest resident at River’s Bend,” said River’s Bend administrator Stacey Bullock. “She has been looking forward to this all week, so we’re thrilled to celebrate her birthday while ensuring she continues to have a long and happy life.”

2020-05-13
Cheryl Slavinsky
Share
Previous ProfitSword Joins Special Edition of In Clear Focus Podcast to Provide Insight on How COVID-19 is Transforming the Business Intelligence Landscape
Next Senior Living … More To Do, But We Can’t Do It Alone