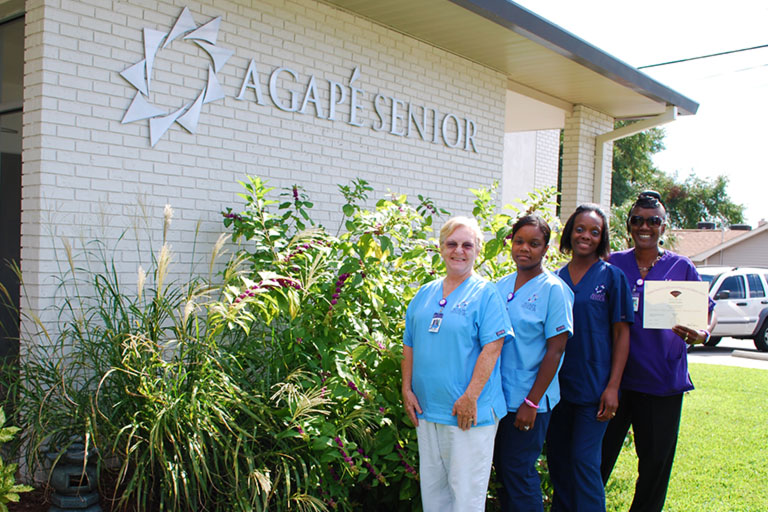 Apprenticeships A Win-Win In Aging Services

When most people think about apprenticeships, the trades often come to mind—welders, electricians, plumbers, mechanics, and carpenters, for example. But apprenticeship programs can also be a real win-win for the aging services industry, helping organizations recruit, develop and retain more skilled workers; increase employee and resident/family satisfaction; and decrease turnover costs.

Last year, Johnston, IA-based WesleyLife took steps to change all that and began working with the Iowa Department of Labor to investigate, define and develop an apprenticeship program for Certified Nursing Assistants (CNAs). In June 2018, WesleyLife became the first healthcare organization in the state to offer a Registered Apprenticeship Program for CNAs.

Realizing that while some people—but not everyone—become CNAs as a step toward becoming nurses, WesleyLife wanted to fully support the career growth of team members while finding new ways to attract and retain its workforce now and in the future.

“Apprenticeships provide an easy framework for a career development path,” said VanDerWiel. “They allow us to communicate the potential for growth with incoming team members—who may not yet understand all the possibilities available to them in our field—and also provide a way for us to structure succession planning in direct care roles.”

With eight communities for healthy living and approved projections to acquire and/or build four more locations in mid- to late-2019, the 71-year-old WesleyLife also offers Home- and Community-Based Services in 15 Iowa counties. Those include home health services; non-medical services such as cooking, cleaning, and dog-walking; nutrition; transportation; adult day services; and public health nursing. The organization, while widely known for its communities, actually serves a greater number of Iowans who choose to remain in their homes as they age.

“We also have entertained discussions with Iowa Jobs for America’s Graduates (i-JAG), given their interest in developing pre-apprenticeship programs,” said VanDerWiel. “Projections are potentially anticipated for as early as fall 2019, yet may not happen until 2020—largely due to the time required for each party to create the program and align resources accordingly.”

After achieving three defined levels of competency, WesleyLife team members receive national apprenticeship certification as CNAs, Advanced CNAs, or CNA Specialists. Leaders hope a Dementia specialization can be consistently offered at a later date, and Geriatric and Restorative specializations can be added as well.

Newly hired CNAs are automatically placed into the apprenticeship program, which current CNAs also may enter. It is expected that team members will use local scholarship funds to cover the cost of the classes. WesleyLife also offers a tuition-reimbursement program.

Apprenticeships also provide opportunities for tax credits in some states. In 2007, Agape Senior, a long-term care service provider in Columbia, SC, was one of the first to question why healthcare employers had not taken advantage of apprenticeship programs, specifically for the post-acute and long-term care sector. South Carolina offered an annual $1,000 tax credit per employee registered in a federally approved Registered Apprenticeship Program (RAP).

Agape worked with the South Carolina Technical College System to establish standards and competencies for a pilot RAP program for Certified Nursing Assistants.

Content was purchased initially from the local community college using Incumbent Worker Training dollars directly from the South Carolina Regional Workforce Investment Advisory Board. Agape staff was charged with developing their own courses, which would later form the curricular component of the job-related education component in the apprenticeship model.

Agape’s foray into a distance-learning apprenticeship program eventually made it eligible for $60,000 in workforce tax credits while educating its workforce. Retention rates also skyrocketed.

During a five-year period, approximately 242 individuals graduated from Agape’s RAP program for CNAs, and the company consistently showed a retention rate (one year after graduation) between 74% and 99% (2011 graduate cohort was 74%, 2014 graduate cohort was 99%).

Agape also realized that voluntary participation in the apprenticeship program was a key indicator in whether or not the individual was suited for work with the organization. Those who registered and dropped out early on were likely to leave their jobs. Those who took the job-related education seriously were much more likely to remain employed for extended periods.

“The increased CNA retention rates significantly lowered costs associated with recruitment and training of front-line employees,” said Jimmie Williamson, Ph.D., who as Agape senior chief human capital officer was instrumental in developing the original RAP for CNAs. “Satisfaction surveys showed increases among residents and families, because CNAs were much more knowledgeable about the body and disease processes, felt empowered, and there was more consistency of care.”

Agape applied the apprenticeship model to other positions including mid-level manager positions for department manager employees, facility administrators and nurses, eventually having over 1,000 courses. “We were more successful growing our own employees than recruiting from the outside,” said Williamson.

In 2016, Agape restructured into two units—one for hospice and the other for training programs called Long-Term Care Health Solutions (LTC Health Solutions). A Long-Term Care University (LTCU) was formed to support the online learning management system for apprenticeships and other internal education requirements.

“Agape Senior has gone through many changes and morphed into other areas but continues to hold onto the apprenticeship model as such a part of its corporate culture, we try to tie it to everything we do,” said Williamson, now president of LTCU and executive director of the Agape Senior Foundation.

Agape currently provides some level of service with one of the remaining business lines for over 120 assisted living and/skilled nursing facilities in South Carolina. The company owns two hospice houses and is building a third, all licensed as skilled facilities.

“Because of such growth in providers—our physicians and nurse practitioners are making 20,000 visits per month serving companies like Trident Health System—we also put together an apprenticeship program on palliative care on the continuum of care so all providers understand the palliative care piece,” Williamson explained.

LTC Health Solutions urges healthcare providers with which it has a business relationship to consider having their own RAP and makes the LTCU instruction available for purchase since it is generic training for the healthcare field and compliant with South Carolina laws.

“Agape Senior CEO Scott Middletown has said that the way you get a raise in the company is to earn an advanced degree directly related to your job or enroll in an apprenticeship program,” said Williamson. “It’s really to incentivize everyone to be in a RAP. There are programs for nurses, nurse practitioners, physicians and managers.”

After the first year, employees earn a 5 percent bonus to their base. After the second year, bonus is 3 percent but on the new 5 percent enhanced total. If an apprenticeship is designed for more than two years, bonus is 2 percent.

“When we had 2800 employees, we were getting $250,000 to $300,000 in state tax credits annually,” said Williamson. “But it’s not the money….It’s the benefits of a highly educated workforce. When you have a CNA who understands the various stages of dementia, the different types and what residents are going through, they have a wealth of knowledge. You’ve invested very little in their education, and the ROI is huge.”