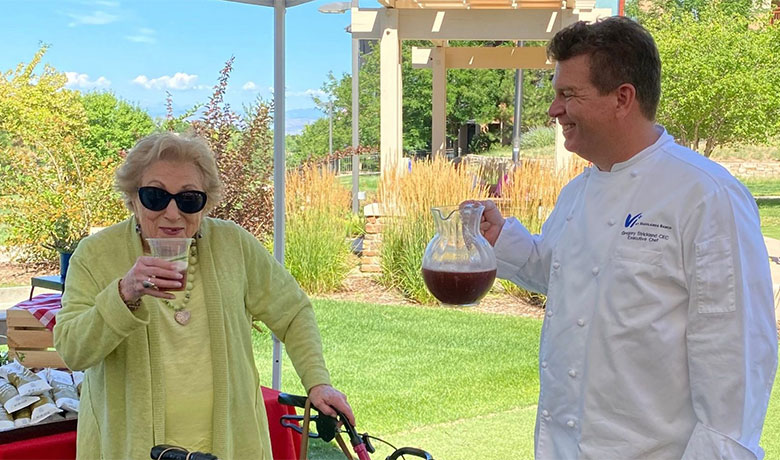 A resident enjoying some fresh beer from the microbrewery

It all started with an herb garden—and a chef’s hobby.

Once the garden was in place, the team started thinking about pollinators, which led to them getting a hive of bees in 2018/2019—which has since grown into seven hives. And the residents have really become invested in the bees.

“The residents have fully embraced it; they really love it,” Strickland said. “The resident response has been awesome.”

Naturally, having seven beehives has produced a lot of fresh honey. “It tastes really, really good! I think it’s the best honey in Colorado—but maybe that’s my own opinion,” Strickland joked. “The residents really enjoy it.”

At the same time, Strickland had been talking with a resident about another interest of his. “One of my personal hobbies is brewing; I’ve been home-brewing for a while. There was a resident who was of German descent and he really liked talking to me about beer,” Strickland said. “He was really encouraging me to do it here at work.”

So Strickland started making test batches in Vi’s kitchen. And right before the pandemic hit, he was starting to make some progress—just on a really small scale. So during the pandemic, he decided to take his project to the next level; he bought some equipment and put together a microbrewery (with the help of the maintenance team).

“Once we got the brewing thing going…it just seemed natural for the honey to be an ingredient,” Strickland said. “We have all this great honey [and] we have beer; let’s put it together…So [for] our very first batch, we decided to do a honey wheat beer—and it came out really nice. I’ll still say that I’m a better chef than I am [a] brewer, but it’s getting there!”

And the residents have been really understanding; they just love that they can taste the honey that came from the community’s bees.

“Everything tastes much better when you make it at home and you have a part in it,” noted Angela Owens, lifestyle director at Vi at Highlands Ranch.

That being said, there’s not much that the residents can do when it comes to the beer.

“Honestly, brewing is a lot of just sitting around and watching a pot…[although] they’re able to sample the brew through the process if they want,” Owens said. “Residents typically talk about the ingredients and the direction they want to take it.”

Strickland agreed, noting that the residents want to be able to provide their input and know what’s going on with the beer. “For the very first beer that we made, we had a couple of residents just poke [their heads] in; they were curious more than anything else,” Strickland said. “But for the second one, we had about a dozen people show up—and most of them stayed through the entire process.”

However, the residents were in charge of naming the honey wheat beer. “We had a brew-naming contest,” Owens said. “We asked residents what they would like to name it, and that’s how we came up with ‘Bees Knees’.”

Owens also noted that the excitement around the microbrewery might not all be about the beer itself. “It’s more the social aspect: It’s fun to talk about, it’s fun to be involved in [and] it’s fun to tell their friends and family about,” she said. “The beer is great, for sure, but the experience is really what I think they like…It’s the experience of being together with other residents and having common interests.”

A lot of the staff are excited about the microbrewery, too. “The residents get excited, [and then] we feed off of their excitement,” Owens said. “It gives us all some common ground to talk about in a very positive way.”

And that’s her favorite part of the microbrewery. “Our residents are amazing people,” Owens said. “They have amazing lives and amazing stories, and it’s most fun and gratifying for us that we are a part of their story—of their life. It’s something that they’ll remember.”

Strickland’s favorite part is that his hard work has seemed to pay off. “The best part is seeing how much enthusiasm comes out of something that you put extra work into,” he said. “The residents have been so enthusiastic and welcoming, and they really like it. For me, that’s just gratifying.”

And he’s put a lot of time and effort into the microbrewery. “It takes a lot of work. Brew day is an entire day—six or eight hours,” Strickland said. “Angela and I still have our regular jobs to do…I’m still the chef; we still have other things going on.”

So it’s a challenge—but one that he embraces. “We enjoy the challenge here, but it’s definitely a challenge,” Strickland said. “We want to be the best and we want our residents to be treated the best, so these are the things we have to do.”

As for the future of the microbrewery?

“We want this to get as big as the residents want it to be,” Strickland said. “Just having good, fresh beer on tap is a lot of fun!”

Additionally, he (and the residents) would love to get the beer to a point where they could sell it.

“If this goes really well and we continue to enjoy it, maybe we could take it outside, have the public enjoy this and have the money go towards a good cause,” Strickland said. He noted that the proceeds could be donated to a relevant cause, like funding research for a cure for Alzheimer’s.

“I know the residents would be very proud of that—and I would be, too,” Strickland said.

Editor
Caroline Chan is the Editor of Senior Living News, an online trade publication featuring curated news and exclusive feature stories on healthcare industry changes, trends, thought leaders and innovations. In this position, she is responsible for creating editorial content, writing regular feature articles and publishing news to SeniorLivingNews.com and distributing its e-newsletter. She is also involved in putting together the educational programs and moderating panels for the company’s HEALTHTAC events. She graduated from Marist College with a Bachelor of Arts in Communications with a focus in Journalism.
2022-09-09
Caroline Chan
Share
Previous Presbyterian Senior Living Appoints New Chief Executive Officer
Next Ryan Companies and Aegis Living to Bring New Senior Living Community to the Ballard Neighborhood of Seattle